This took long enough but to make up for it I bring you my favorite FPS character: Doom Guy. 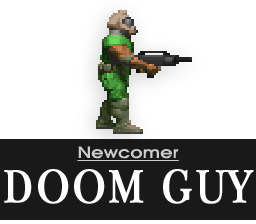 Left and Right arrows to move.
Up to jump.
Control to shoot.
Shift to run while pressed.
SUPR and PAGE DOWN to select weapon.

You start only with a Pistol with unlimited ammo, though useless in the end. You have to find the other weapons in the map, and find ammo for them as well. The Chaingun and The Plasma Rifle shoot repeatedly while pressing Control.

With Doom Guy the game is more action oriented, so I decided to decrease the puzzle factor of the map by decreasing the number of disks required in every stage. This effects the other characters as well.

All the maps have enemies.

No new map for now.

I’ve changed the damage model for Doom Guy’s and Samus’ weapons. No more flashing invisible time for the enemies. Shoot at will, the enemies will process every hit.

With Doom Guy I have all the characters I wanted to code for this game so I’m glad to have finally done it. The shotgun was especially funny to code. Ah, the memories. Special keys to select a weapon in game: 2-Pistol, 3-Shotgun, 4-Chaingun, 5-Rocket Launcher, 6-Plasma Rifle. Those were added in the last minute so unfortunately can’t be mapped out on other keys.

In the next update, which I expect to be the last one, I’ll add the final level and some help text in the game, nothing too big, but still I didn’t want to rush those final details in this update.

The next update shouldn’t take a lot of time, but I’m not sure anymore of how busy I’m going to be tomorrow. I’ve gotten used to the idea already so just think I’m working on it whenever I can.

I’ve been hosting this site by myself for at least two months. Special thanks to Valk for have hosted me for so many years. I neglected this step for lack of knowledge of how to do it, or the means to do it to be exact, but after a lot of research I felt it was time to take full responsibility of the site if I ever wanted to get more serious with it. Funny how just now when I’m busier than ever and unable to update as much as I’d want is that I took this step, but I’ll work things out somehow on the go, I hope.

Before announce anything, the plan was to see if the new host were reliable enough to do anything with it. Then I would start a new website in a new domain, keeping this site as an archive. Moving the files was not as straightforward as I’d liked it to be, but I managed to do it. Busy in my works weeks passed, and then I noted how little use the forum had for me considering that I’m unable to update as fast as I’d like, so I decided to keep it offline for now. That’s energy that I expect to use in my projects until I find a better solution.